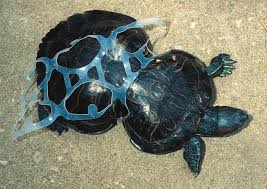 Ocean plastic is a big big problem. And one of the main causes of wildlife death is from a certain plastic that isn’t discarded properly. And that plastic is the plastic you get whenever you purchase a six pack of pop. or beer, or any other number of drinks that come in six packs. The plastic that you get with it is often thrown out before you take scissors and cut escape routes for birds, turtles, and other sea life. A craft brewery in Florida have rectified that problem. The have developed a 6 pack holder for their beer that is also made out of wheat and barley. It’s 100% biodegradable and if an animal comes in to contact, they can also eat their way out of the problem. The company the craft brewery have partnered up with is hoping that bigger breweries and eventually all companies that make the product that uses the plastic rings – they hope they will switch to the new safer non plastic, biodegradable ones. Not a moment too soon.