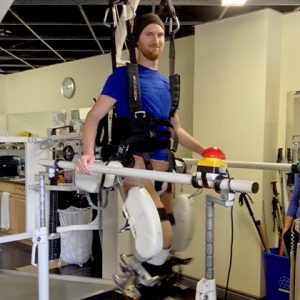 For those who have experienced a major life changing physical disability it can be a time of fear, depression and feeling of hopelessness.

Why? Because you never know if you can ever utilize your everyday gifts simple as walking again. Most of us forget how much we rely on our everyday motor skills and senses.  However, there is new found help for those individuals suffering from brain and neurological disorders, stroke or spinal cord injuries to walk again here in Surrey.

Project Lokomat is the, ‘world’s leading robotic medical device.’ It’s a machine that gives people usage of their legs once again (scroll below to watch the video of the Lokomat machine). This machine was invented and been in use in for over 20 years in Switzerland.

Now, you’re probably wondering why am I even talking about all of this.

Well, I recently had the opportunity to speak to Sharika Thandhi who like each and everyone of us was doing the every hustle of life. Until one day her husband, Sanjiv Thandhi experienced a major cardiac arrest. Fortunately, Mr. Thandhi survived the major heart attack but this left him with a serious brain injury and bed ridden for the rest of his life. Mr. Thandhi received regular physiotherapy seven days a week for a year to help bring flexibility and motion back into his body and to encourage his body to straighten out. However, this had reached its limit and Mr.Thandhi again felt hopeless to ever recover his independence again. During this time they heard of Neuromotion receiving the Lokomat and both Mr. & Mrs. Thandhi were very excited to see if this machine could bring a positive change to his disability. And, after four months they have seen improvements.

Pauline Martin, owner of Neuromotion Physiotherapy says she hopes to have Mr.Thandhi walking out of his wheelchair into bed and the couch within the year.

In the interview below, Martin  goes into more depth about the Project Lokomat and her goal to help people with serious disabilities to walk again. The Lokomat Machine was delivered in December 2018 to Neuromotion in Surrey. First lokomat in BC was donated by a family to the Vancouver Neuromotion location approximately 10 years ago.

Currently, there are three Lokomats in BC and one is here in Surrey.

Fighting for your dreams isn’t always easy, but it’s so worth it. – Anon

Have a listen to the Thandhis’ struggles from hopelessness to being able to take steps forward to walk again.

You can hear the entire conversation here: