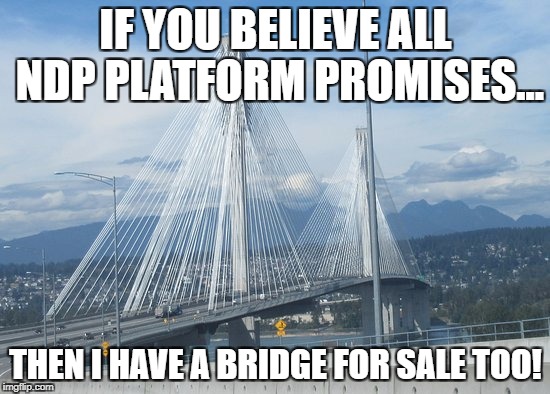 By The WebmasterNovember 14, 2017News
No Comments

So let me ask you a question:

If you were to purchase a vehicle that promised you air conditioning, power steering, automatic transmission and a extended warranty, but instead, the day after you paid for the vehicle you received a Vespa, a helmet and good luck, you would be ticked.

Say hello to the BC NDP…or should I say the Government of British Columbia.

Make no mistake, the BC NDP are in charge and are now looking down the barrel of the very promises that they made to us to get us to vote for them at the booth back on May 9th.

The NDP promised to get rid of MSP premiums…immediately.  Premier John Horgan said as much on his stump Q & A here on PULSE of the Fraser during the campaign.  So far, we have been told the MSP will be rolled back 50% on Jan 1, (which was a Liberal promise that the NDP chastised as too little too late during the campaign), and that the rest of the MSP elimination would be sent to ‘committee’ to study the best way to get rid of the MSP.

That is not immediately, that is no sooner than March 31, when the report is due and then the government will have to digest and implement none, some or all of the recommendations.

So, MSP has not been eliminated immediately.  0/1.

How about this one:

On the opening page of the NDP Platform, which you can still find online here, this bird cage liner said that the NDP would ‘Build 114,000 rental and co-op homes, and provide renters an annual rental home credit of $400.’

When asked last week in Question Period what the plan was for this 114 thousand home solution, the NDP said that they don’t have a current plan and that the 114 thousand rental and co-op homes was a number that they aspired to achieve.

Aspired to achieve?  The foundation of this platform released by the NDP, their manifesto 118 pages in length, isn’t built on genuine thought, it’s built on aspiration.

That is like telling you I plan to win an Academy Award, and then after you invest in my career I advise you I dream of acting one day, but in the meantime, this job at Tim Horton’s is the best I can do.

You can read on about what the NDP promised us and you will find some promises that have been kept, others halfway there, and others not addressed at all.  What is most hypocritical of this group is their statement above all of their promises…that reads:

‘It’s time for you to get a break — a break you won’t get from phony BC Liberal promises and their choices.’

There was also nothing in this NDP ‘Hope Chest’ that said that they would vote for a taxpayer subsidy for themselves and all parties to ‘wean’ themselves off the donations from business and unions that they so loathe.  That didn’t come out on the election run did it?

I’m not saying that the BC NDP are the only ones guilty of not keeping their word.  What I am saying is that the very platform that they campaigned on…getting rid of phony promises, is one of the many things that this government has yet to deliver on.