What’s Trending with Leslie & Scooter- Did Pete Davidson just confirm a Romance with Kim K?! Why Jeff Bezos has it out for Leonardo DiCaprio & MORE

Did Pete Davidson just confirm a Romance with Kim Kardashian?!?!

The “Saturday Night Live” star appeared on “Late Night with Seth Meyers” on Monday and pivoted the conversation when the host asked about his personal life.

“I want to address something. I feel like I want to confirm if it’s real,” Meyers, 47, began, referring to Davidson’s various dinners with Kardashian last week.

“There’s a lot of people I walk by, and people are, like, whispering and, you know, making eyes at me,” Davidson, 27, interrupted. “But it is true: I do have a show on Tubi coming out.”

The comedian, was referring to his upcoming animated show, “The Freak Brothers,” which premieres Nov. 14 on the streaming service.

After Leonardo DiCaprio was seen chatting up Jeff Bezos‘ girlfriend, Jeff posted a picture of himself in the woods, leaning on a sign that warned of a “fatal drop.”  And he said, “Leo, come over here, I want to show you something . . .”

A video went viral yesterday of  Leo chatting up Bezos and his girlfriend Lauren Sanchez at some big Hollywood event.  And it looked as though Lauren was making some serious goo-goo eyes at Leo.

Jeff responded by posting a picture of himself in the woods, leaning on a sign that says, “Danger!  Steep Cliff.  Fatal Drop.”  And in the caption he said, “Leo, come over here, I want to show you something . . .”

Leo, come over here, I want to show you something… @LeoDiCaprio https://t.co/Gt2v9JZTNz pic.twitter.com/KqGLB839NI

But the navy and red Schiaparelli gown wasn’t just custom couture, it was also a “bulletproof dress.”

“This is one of my favorite things I’ve ever worn,” Gaga said of the look, while reflecting on her most memorable outfits for British Vogue.

“I wore this Schiaparelli design for the inauguration, and nobody knows this, but this is a bulletproof dress.” 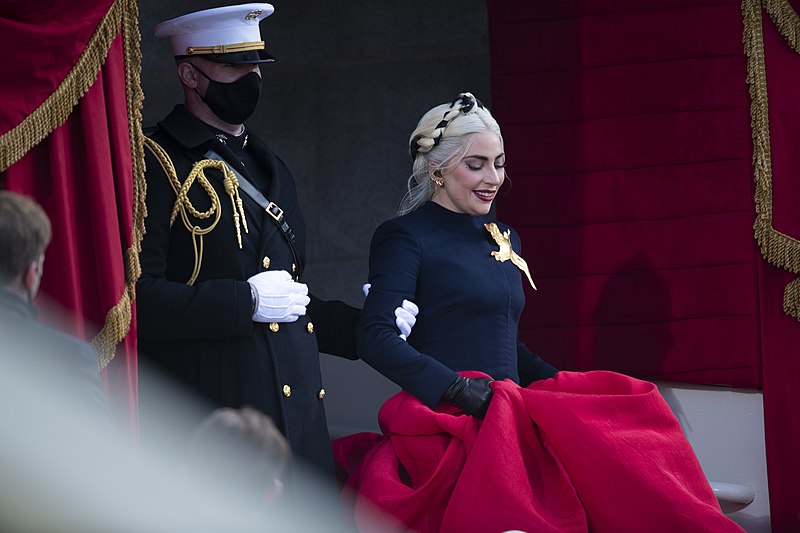 Travis Scott will pay all funeral costs for the eight people who died at the Astroworld Festival in Houston on Friday night.  He’s also teaming up with an online service called BetterHelp to provide free mental health services to those affected.

A statement from his rep says, quote, “These are the first of many steps Travis plans on taking as a part of his personal vow to assist those affected throughout their grieving and recovery process.”

On top of that, Live Nation is giving out full refunds to all ticketholders . . . those who were at Friday’s show and people who had tickets for Saturday’s events, which were canceled.

They’re also setting up a fund to help pay for medical expenses and mental health counseling for those injured.

Salma Hayek hired an expert to check out her haunted home in London after having lights go on and off and windows and doors open and close.  The expert found a total of 20 ghosts and got most to leave, except for the good spirits like a nun.

On “Ellen” yesterday, she said, quote, “Some bodyguard didn’t want to work there anymore because the piano played by itself . . . lights go on and off . . . the doors and the windows open and close.”

Salma said she’s seen some of it, and so have others in her house.  Her daughter has even seen the actual ghosts themselves.  When the expert arrived, he found 20 ghosts and asked them to leave.  Most of them did except for one whom he said was a nun that was praying.  He said, quote, “You [paid me] to get rid of the bad vibes . . . she has good vibes . . . she stays.”