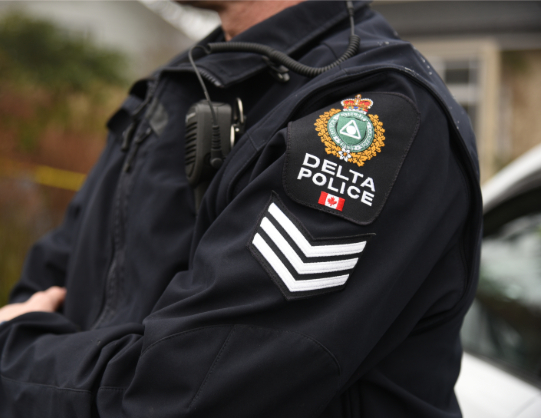 By Vanessa YbarraJune 6, 2019News
No Comments

An apparent plan to hide in a Scott Road department store after closing, and break out with stolen goods, did not go so well with for a man who is now facing six charges stemming from the incident.

On May 23, Delta Police officers were flagged down at 2:49 am by two store employees, stating the store had just been robbed. The suspect in the incident was believed to have remained in the store past closing, and broke out after being confronted by staff members. The suspect allegedly brandished a knife and threatened the employees before leaving with a shopping cart full of merchandise.

After learning which way the suspect was headed, the Delta Police officers immediately began to search for the man, who allegedly ran away upon spotting police officers. After a brief chase officers arrested the suspect, and located the stolen goods. The merchandise was then returned to the store.

“Our officers were definitely at the right place at the right time for this incident,” acknowledges Cris Leykauf, spokesperson for Delta Police. “The store employees thankfully were not physically hurt, and they were able to provide a very timely update to the officers of which direction the suspect had headed.”

38-year-old Michael Douglas O’Brien of Mission, BC, faces six charges relating to this incident including robbery, breaking out, assault a peace officer, obstruct a police officer and failing to comply with probation orders. He is considered to be known to police, and is associated to a residence in North Delta.

O’Brien is currently in custody and is next scheduled to appear in court on June 7, 2019 in Surrey.