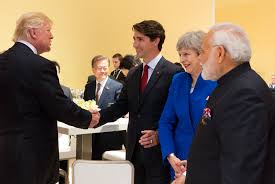 If you want to truly affect someones life, hit ‘em where it hurts – in their wallet. That’s what people are calling for after the latest round of, ‘Let’s go to (Trade) war with America.’ The president – for some reason – has chosen Canada  to bully and pick on this week via Twitter. The PM at this point is standing up to the President. Macleans Magazine have written an article that’s headline reads, ‘How Canadians can boycott Donald Trump.’ And what you get is a list of companies either owned by, or selling products owned by Donald Trump. The author talks his truth when he writes, ‘it is futile for western countries to penalize American industries in the hopes it will dissuade Trump from his trade wars – he simply doesn’t care. But, if these countries were to aim at Trump’s personal business interests, he would back down swiftly.’ Not sure about that. But if you care enough to be willing to alter your life and where you shop and what you shop for; here’s a list compiled by Macleans via the ‘grab your wallet’ campaign. If interested (you can see the list on my blog page at pulsefm.ca) here is the list of companies that are either owned by or sell Trump products in Canada :

* Whole Foods (a subsidiary of Amazon)