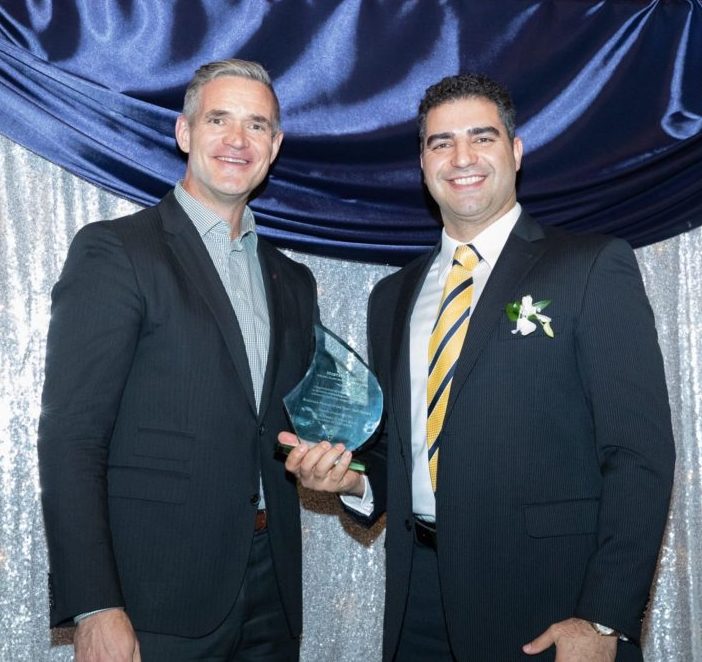 South Surrey Business Person of the Year Award goes to….

A martial arts instructor in South Surrey has been honoured as the Business Person of the Year by the South Surrey & White Rock Chamber of Co.

“It means a lot to me,” said Mostafa Sabeti. “For ten years to work hard, put everything together and after all those years have that hard work recognized, I’m really happy.”

“The South Surrey and White Rock area is a growing community and an important part of the Greater Vancouver area for employment and economic growth,” sys Ritu Khanna Executive Director of the South Surrey & White Rock Chamber of Commerce. “Our Chamber serves an important role to support and advocate for the businesses that are part of that growth. Celebrating the event’s 20th Anniversary, we wanted to do things a little differently. This is the first time the Chamber opened up the awards to the entire business community, rather than just Chamber members and we introduced 2 new awards, the Supporter of the Arts Business of the Year Award and the Community Builder Business of the Year Award.”

Mostafa Sabeti, immigrated to Canada from Iran in 2006.

“Because my business is word of mouth and you collect students one by one, when I first started it was really hard to know enough people around you and people who know you, who you are, and what you’re doing. What I did is I started work as a volunteer with schools, RCMP, the City, recreational centres, wherever they needed volunteers I tried to engage myself there and promote my business.”

The award is the latest hardware on the 37 year old’s shelf.

The father of one (soon to be two!) has competed in numerous  local and International Martial arts tournaments, winning All Canada Kickboxing Champion and record-holder for fastest knock out in national selection team history, World Champion and the best technical fighter for CANADA 2002, and most recently the 2019 Mens World Heavyweight Kickboxing Championship.