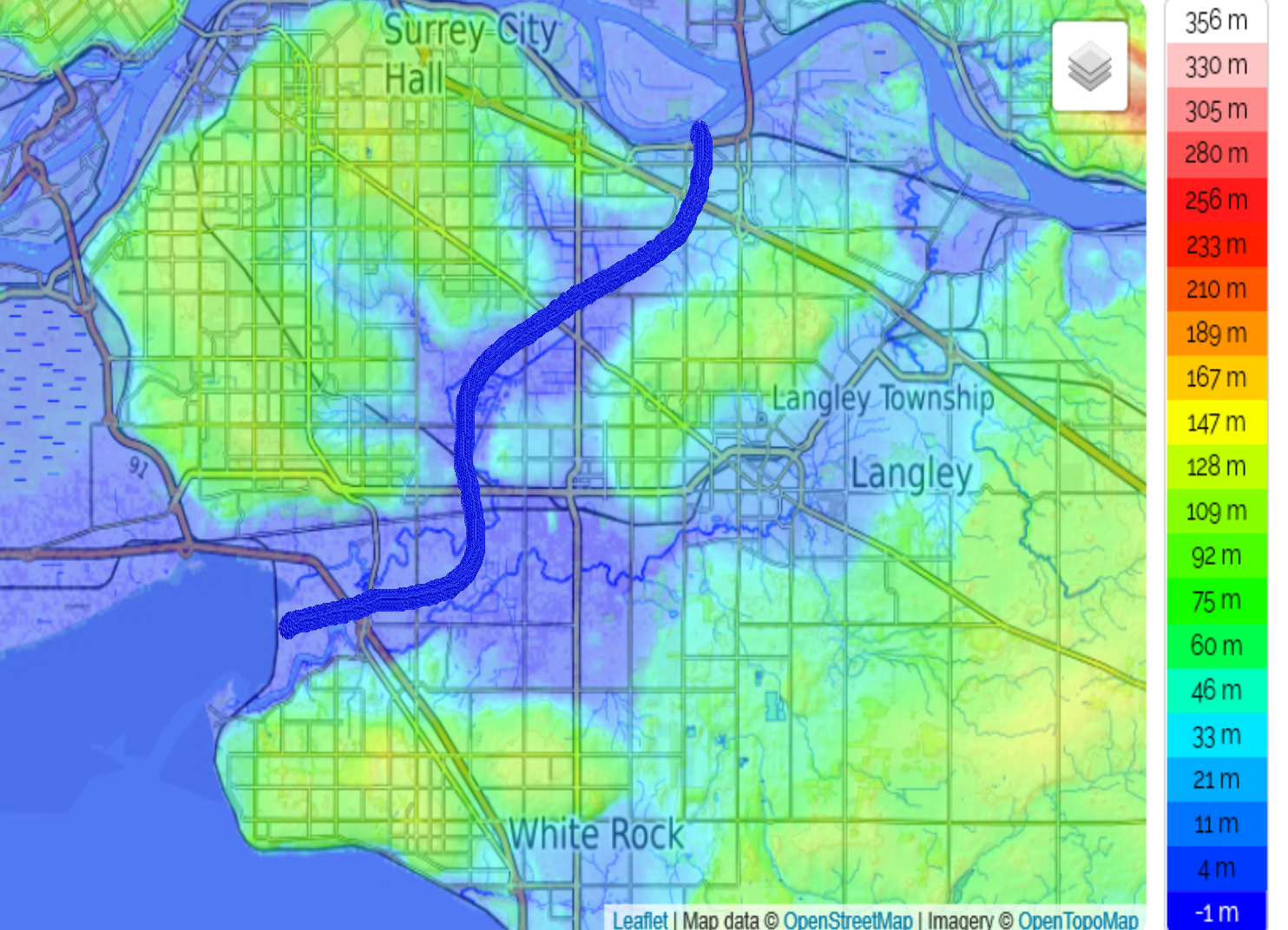 Mayor Doug McCallum’s plan to build a canal through commercial areas of the city sounds finaincially untenable, according to an expert on such projects.

It might be workable if he wanted to stream water from the Fraser, through the floodplain, and into Boundary Bay, however, according to Kees Lokman, assistant professor of landscape architecture at UBC.

A topographical map shows the most likely place where a canal could be considered. (Map credit of topographic-map.com)

Lokman’s specialty is large-scale architecture and its effect on surrounding landscape and environment.

He responded to a Pulse FM request to examine the feasibilitly of McCallum’s pronouncement that he wanted to build a canal system in Surrey, connecting commercial areas and providing a tourist attraction.

Lokman said that prospect would be difficult.

“I think the way the project is framed right now is very much about commercial opportunities,” Lokman said. “But I think if there’s an opportunity to think about stormwater management, bringing habitat into the city, I think the project becomes more rich and complex – Topographically, it’s going to be quite hard to build canals.”

Lokman outlined a path reported by Pulse FM last week, that saw the water being piped in from the Fraser at about 192 Street, through Port Kells, into the agricultural lands and into Boundary Bay.

He said if the idea is stormwater management, it could be worthwhile.

But crossing roads to create a beautification project, “that could be costly proposition.”

McCallum mentioned the idea to a group at the Whalley Business Improvement Association, June 13

He wouldn’t say where exactly the canal would be built, except to say that he’s asked staff to look at “underutilized roads” as a route to save on the land costs for it.

McCallum told media Thursday it was time to “think outside the box” and create features in this city the public wants. He said the idea came to him on a recent visit to Qatar.

He envisions a walkway around the canal with shops and a pedestrian-friendly atmosphere.

City Coun. Linda Annis said the idea is ridiculous, pointing out that there are far more pressing issues in this city than the creation of a canal.

“I think it’s ridiculous, Surrey has lots of issues we need to deal with right now,” Locke told Pulse FM.

“Spending those kind of dollars on something like that is quite absurd.”

Locke said the idea came as a complete surprise to her and her council colleagues.

“No, there’s been no discussion about this,” Locke said. “I heard about it through Twitter.”

McCallum said he would use the Fraser to feed the canal.

The problem with that is most of Surrey is closing in on 100 meters above the Fraser. With water naturally flowing downhill, there aren’t a lot of places where one could be build from the Fraser.

According to a topographical map of Surrey, one of the most logical places would be south of Barnston Island, down Harvie Road, then either through the agricultural land reserve or the Serpentine River.

Those areas only go about 10 meters above the Fraser River.

It’s unclear how much of this would be used to control upland flooding resulting from developments recently approved in the Tynehead area of Surrey. With trees cut down, and the ground paved, lowland areas would be subject to seasonal flooding.

Coun. Jack Hundial also heard about it on social media and said the canal makes no sense at all.

Introducing saltwater from the Fraser River into some of the agricultural lowlands and fish-bearing rivers, such as the Serpentine and the Nicomekl could spell disaster.

He said it seemed as though the mayor mentioned it “off the cuff” at the Whalley meeting, then got a call from the media the next day and “doubled down” on his argument for it.

Former Mayor Linda Hepner took heat when she said she wanted a ferris wheel in Surrey.

Hundial said that pales in comparison.

“If you’re building an entertainment district, a ferris wheel makes sense,” Hundial said, adding it’s difficult to imagine anyone wanting this kind of expense for a canal.