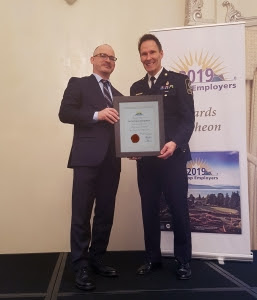 By Vanessa YbarraFebruary 26, 2019News
No Comments

Delta Police has been named as one of BC’s top employers in 2019, which is noteworthy as BC leads the nation with a strong economy and booming job market, making it challenging to both recruit new staff and retain employees.

“This is the first time a police force has been named as one of our province’s top employers,” noted Delta Police Chief Neil Dubord. “We’re particularly proud of that accomplishment. Delta is one of the safest communities in Metro Vancouver. I believe it’s the commitment and dedication of our officers and police staff, with the strong support from the community, our police board and Mayor and Council that’s led to that outcome.”

The BC Top Employer’s project for 2019 was the most competitive on record. Delta Police and other successful employers were evaluated on eight criteria: physical workplace, work atmosphere and social, health, financial and family benefits, vacation and time off, employee communications, performance management, training and skills development and community involvement.

“Our workforce, both civilian and sworn, must reflect our community and its values,” says Chief Dubord. “Delta Police is well known for its outreach and No Call Too Small approach. But we’re also known within law enforcement circles for the high calibre of our training and equipment. That’s balanced with benefits that provide for a healthy work and home life balance, to ensure our staff are ready to meet challenges. We recently were called to answer a significant challenge, when one of our off-duty officers stepped in to save a woman and was seriously injured.”

“Fortunately the Delta Police Department doesn’t often face such a test. But as this event demonstrably proved, our officers and our police staff are exceptional professionals even under extreme pressure. We may have been named one of BC’s Top Employers, but I think our people are more aptly described as some of the Top Employees in the province. I am so proud of them all,” says Chief Dubord.

The following link outlines why Delta Police was recognized as one of BC’s Top Employers https://content.eluta.ca/top-employer-delta-police-department.