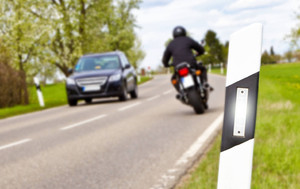 We all try and watch what’s going on around us when we drive. We also like to be aware when someone on a motorcycle is in the vicinity. But do these rules apply when the driver of the motorcycle is driving like an idiot? You’ve seen the guy on the sport bike speeding while dipping and dodging unsafely thru traffic. Whenever I see that under may breath I always say to myself, ‘dead man driving’. Two days ago on Highway 17 Delta police pulled over a motorcyclist driving a, ‘crotch rocket’ as someone who rides told me they’re known as in the cruiser motorcycling community. The driver was clocked in an 80km/hr zone doing 185kms/hr. That is soo far into the ridiculous stratosphere that not only did they deserve an excessive fine for excessive speed, not only did they lose they lose their bike for a week, but I certainly hope the police told the individual to make sure they had a Will. Motorcyclists deserve our respect and safety on the roads as do all other safe drivers. People who drive like they own the road, especially on a motorcycle…some would say they deserve everything that’s coming to them. Just Sayin’.