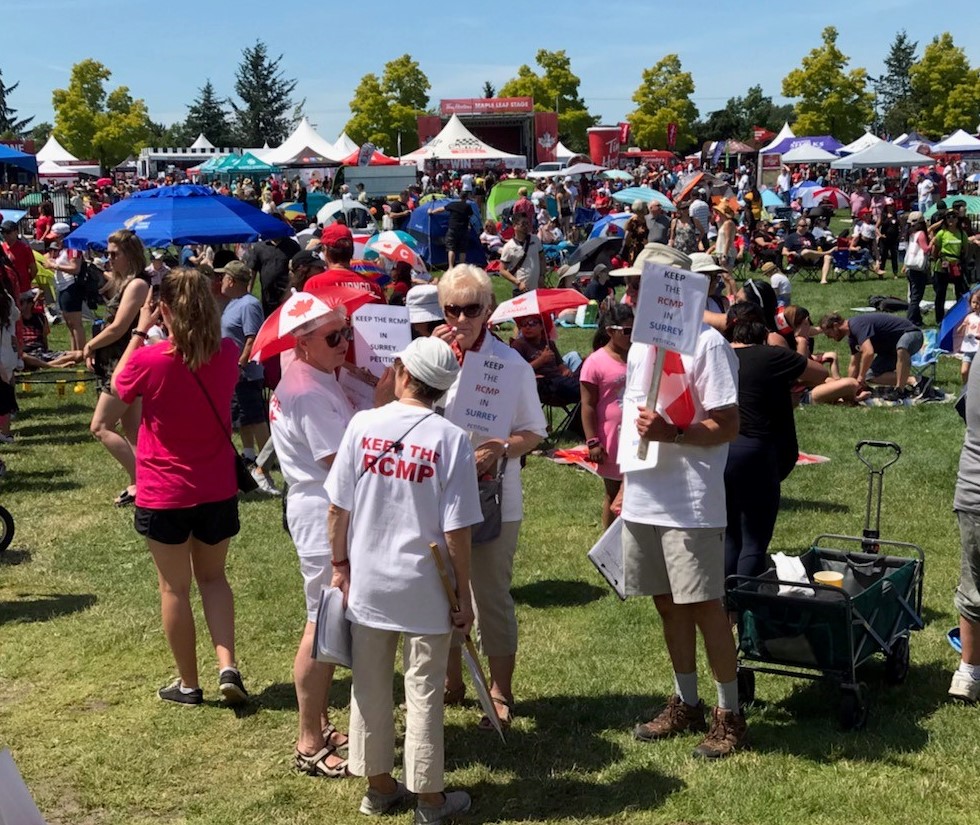 Despite being denied a booth at Surrey’s Canada Day event, a man petitioning to keep the RCMP in Surrey showed up anyway, with t-shirts, placards and petitions in hand.

And he left with huge support to keep the RCMP as Surrey’s police force.

Since Mayor Doug McCallum’s Safe Surrey Coalition was elected last fall, Surrey has been forging ahead with a plan to replace the RCMP with a municipal force.

Proponents say it will be better for the city, with more local control. Critics say this city won’t get as good policing and taxpayers will have to pay more.

In the midst of all the debate, Scott, a resident of South Surrey, became a fixture at Surrey’s public consultation meetings, which started on May 23.

During that time, he gathered more than 4,000 signatures from people who want to keep the RCMP here.

He arrived at the Canada Day celebrations in Cloverdale Monday at about 11 a.m. and stayed about six hours. During that time he received another 2,550 signatures.

“We had people coming up to us and saying `Do you mind if I sign your petition,’ ” Scott told Pulse FM in an interview Tuesday. “We had lineups,”

He was there with his wife and a handful of volunteers.

No one there was critical of what they were doing, he said.

The proposal to create a municipal police force in Surrey is now in the hands of Mike Farnworth, the minister in charge of public safety.

And that’s where the petitions are going.

He’s sending the latest batch off to Farnworth’s office this week.

He hasn’t heard from the minister regarding the petitions.

“I haven’t really expected to hear from him,” Scott said. “I am expecting to possibly meet with him sometime soon, but that has yet to be finalized.”

Scott, who has a son in the RCMP, said he had no idea there would be so much support for his initiative to keep the Mounties in Surrey.

“Just by default, I’ve become the voice of a lot of people,” Scott said.

Meantime, the executive from several Sikh temples in Surrey issued a call to Farnworth to approve Surrey’s transition plan to a municipal police force.

Farnworth, for his part, said he is in no hurry to approve the city’s plan and will give all due diligence in reviewing it.

Scott says those that want to assist in any way can contact him at ivan.scott@solutionciment.com