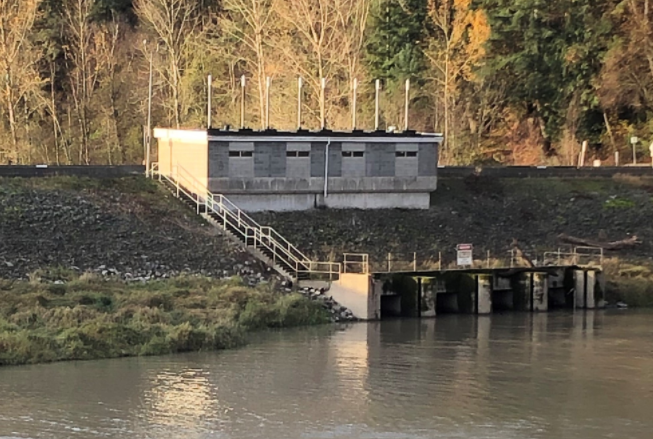 By LeslieNovember 22, 2021News
No Comments

There is some good news coming out of Abbotsford after the community was hit by catastrophic flooding, but concerns remain as the situation continues to evolve.  According to Mayor Henry Braun, the floodgates at the Barrowtown Pump Station have fully opened, with water flowing straight from the Sumas River into the Fraser River, alleviating more pressure on the community.  While progress is being made, Braun admits water levels remain too high.  The city has also announced its local state of emergency will be extended for another week

More rain is expected to move south from B-C’s North Coast today.  Environment Canada has issued a special weather statement for the North Coast.  It says rainfall amounts of 60 to 90 millimetres are expected for Prince Rupert and 30 to 40 millimetres for Haida Gwaii.  The agency says the rain could cause some flooding and possibly mudslides too.  Meteorologists say the system will move south today before another round of wet weather will start hitting flood-affected areas on Wednesday.  B-C officials say they’re preparing for the impacts of another storm system.

The officer in charge of the Surrey R-C-M-P is accusing the city’s ruling slate of undermining public safety.  Assistant Commissioner Brian Edwards issued a statement yesterday morning saying that he will not tolerate “deliberate” attempts made by Mayor Doug McCallum’s Safe Surrey Coalition to undermine public safety in Surrey.  The coalition issued a statement to social media saying hundreds of thousands of dollars have been spent by Mounties to undermine the civic slate’s authority.  Edwards says the comments could directly impact Mounties’ efforts to maintain public safety.

The federal government says B-C residents displaced or left jobless due to extreme flooding should immediately apply for EI benefits.  The federal government is waiving the requirement for applicants to show a record of employment, recognizing that it may be difficult for many to obtain the proper documentation right now.  The government says it will figure out a solution and Ottawa will help affected residents for as long as is needed.

Vaccination rates for eligible Surrey residents have hit 90 per cent, according to the latest data.  That’s up less than one per cent from Nov. 11.  First doses are at 94.7 per cent.  Province wide as of Nov. 18, it was slightly lower with 87 per cent of those aged 12 and up having received both doses.

As the first doses of Pfizer’s COVID-19 vaccine for kids five to 11 arrive in Canada, psychologists are offering tips to parents with kids who are afraid of needles.  Two of every three children have a fear of needles in Canada.  Experts say parents can use books, toys, and video games as a form of distraction to keep kids calm while getting vaccinated.  They also suggest having your child sit up and in your lap if they’re younger.  Psychologists say needle phobias often start in childhood, but can have long-lasting consequences into adulthood.

Environment Canada meteorologists are set to release more information about the next significant rainstorm bearing down on flood-damaged southern B.C. Weather conditions changed over the weekend with what the weather office describes as an atmospheric river packing heavy snow and rain for the north coast, along with powerful winds over much of the north-central part of the province. That system is due to move south by mid-week and Environment Canada’s preliminary estimates show it could bring about 50 or 60 millimetres of rain to the Fraser Valley by Wednesday or Thursday. That’s in addition to about 10 to 20 millimetres that’s possible over Abbotsford and Chilliwack today as a smaller rainstorm moves through.

Air Canada says it is doing what it can to ease supply chain issues linked to severe flooding last week that cut highway access between the Lower Mainland and the Interior. Limited access has been restored — but only for single-lane, essential traffic on some routes — so the airline says it is increasing cargo capacity from Toronto, Montreal and Calgary until the end of the month. Air Canada will use wide-body planes on 28 passenger flights into Vancouver, providing more room for cargo, while 13 all-cargo flights are also scheduled — boosting total cargo capacity over the 10 day program to nearly 600 tonnes. The company says it has also added larger planes to its flights between Vancouver, Kelowna and Kamloops to help travellers reach those cities.

Vancouver-based Lush Cosmetics is taking a stand against what it says are consumers’ mental health challenges related to the use of social media. The company says it will deactivate its Instagram, Facebook, TikTok and Snapchat accounts on Friday and will stay off the platforms until consumers can be offered a safer environment. Lush is sticking with Twitter and YouTube and says it is also investing in new ways to connect with the public.

The barge that’s been grounded at Vancouver’s Sunset Beach since last week’s historic storm will be staying there a little while longer. Owner Sentry Marine says it’s waiting for an expected King Tide to move the vessel in early December. A tugboat was brought in to remove the barge on November 16th, but it wasn’t strong enough to do the job. The Canadian Coast Guards says the barge was one of nearly two dozen vessels that were set adrift by last week’s storm.