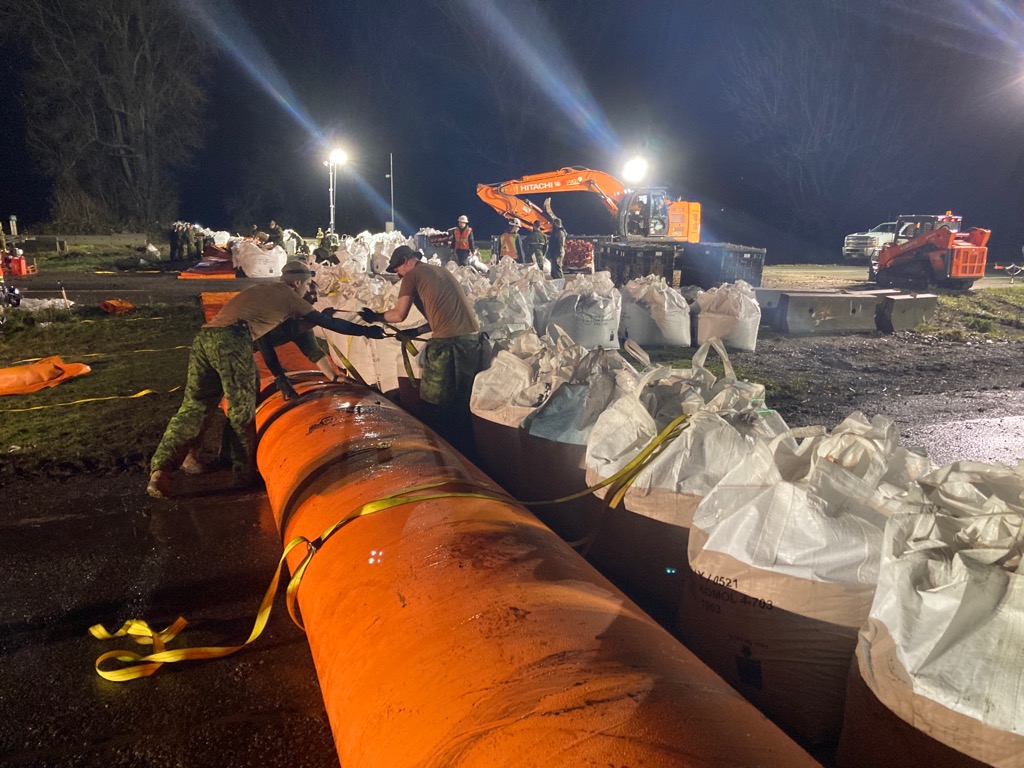 By LeslieDecember 2, 2021News
No Comments

Several rivers in B-C remain under flood warnings and hundreds of homes evacuated as the province cleans up from heavy rainfall.  There are 12 evacuation orders involving 350 homes in the Fraser Valley, and more than 1,600 are on alert.  Armel Castellan, a meteorologist with Environment and Climate Change Canada, says the floods on the heels of summer’s extreme heat is in line with expected trends.  He says weather stations in Nanaimo, Victoria, Abbotsford and at Vancouver’s airport have broken precipitation records for the fall season.

An official with the B-C River Forecast Centre says drier conditions are expected today and through the weekend.  David Campbell says river levels will rise from rain and melting snow, but conditions are expected to improve.  He says areas on the central and south coast areas will get a reprieve after an extended period of challenging conditions.  Campbell says people should stay away from fast-flowing rivers and potentially unsafe riverbanks for their own safety.

The U-S is getting ready to require all foreign citizens flying into the country to get a COVID test the day before — but it’s not clear if Canada will start imposing a similar restriction on Americans.  Canada’s stringent new rules requiring foreign air travellers to get tested upon arrival and self-isolate while awaiting the results don’t apply to Americans — for now.  Both countries are taking steps to try to limit the spread of the new COVID-19 Omicron variant.

A man who was shot at a home in Surrey earlier this week has died in the hospital.  Early Monday morning, RCMP were called to 135 Street near 96 Avenue, where they found the 45-year-old man with life-threatening injuries. He died the next day.  Investigators believe this was a targeted hit….RCMP said the victim was known to police, though he has not been identified.  This was one of three shootings in Surrey in recent days.

BC health officials announced 368 new COVID-19 cases on Thursday, bringing the total number of recorded cases in the province to 219,180. In a written statement, Provincial Health Officer Dr. Bonnie Henry and Health Minister Adrian Dix said that there are 3,020 active cases of COVID-19 in the province. Of the active cases, 284 individuals are currently in hospital, 97 of whom are in intensive care. The remaining people are recovering at home in self-isolation.

There have been five COVID-19-related deaths over the past 24 hours, for a total of 2,345 deaths in BC. Of the new deaths, three occurred in Fraser Health and two occurred in Northern Health.

Past two weeks, cases hospitalized per 100,000 population after adjusting for age (November 17 to 30)

Public Safety Minister Mike Farnworth says he’s grateful that B-C appears to have seen the last of a series of intense storms. But he says it could take a long time to rebuild the hardest-hit parts of the province following widespread flooding and landslides. Farnworth says the federal and provincial governments have now formed a working group to make sure help and information are available at all levels. He also says he received an encouraging update today on the Trans Mountain Pipeline but did not provide a date when it might reopen or when fuel rationing in the province might end.

A ski resort in B-C’s Interior is apologizing for comments one of its executives made about the impact of essential travel restrictions for Highway 3 on the tourism industry. Michael J. Ballingall, senior vice-president of Big White Ski Resort, said he wanted to see the highway reopened to non-essential travel for a six-hour window between noon and 6 p-m daily to help the resort. The comments faced criticism as the province deals with damage to highways following historic flooding and rainfall. The resort has since issued a statement in which Ballingall apologized.

Vancouver police say officers seized 20-thousand dollars worth of stolen bikes from the rooftop of a building in the Gastown neighbourhood. Police say officers began investigating after posts on social media suggested someone was using the rooftop to store bikes. Officers found that the bikes were being lowered to the rooftop by rope from a neighbouring building. Police did not say if anyone has been charged.

U-S President Joe Biden says Canadians and all other foreign visitors who travel to the states by air will need to get a COVID-19 test no later than 24 hours before their departure. Biden is slashing the current 72-hour testing window for fully vaccinated travellers as part of an effort to slow the spread of the new COVID variant, Omicron (OH’-mih-kron). For the moment, Canada has exempted U-S air visitors from its own stringent new international travel rules, but that could change.