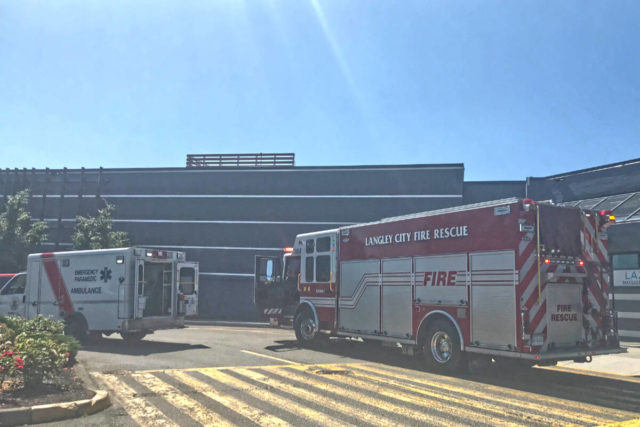 By Jeremy TubbsOctober 25, 2022News
No Comments

Two chairs reserved for two Vancouver officers sat empty throughout an Indigenous ceremony Monday evening in Bella Bella, BC. The officers did not attend the ceremony which was held to help a grandfather, his granddaughter, and a Central Coast community heal from a wrongful arrest almost three years ago in Vancouver. But Maxwell Johnson, who was wrongfully arrested and handcuffed for trying to open a bank account for his granddaughter, told the ceremony the past three years have been difficult ones, but work must continue to end systemic racism. Vancouver Police Board vice-chairwoman Faye Wightman apologized for the trauma Johnson has suffered, adding the healing journey must begin.

BC’s seniors advocate says the proportion of long-term care home residents taking antipsychotics without being diagnosed has increased by almost four per cent in the last year. The figure is in Isobel Mackenzie’s newly released long-term care and assisted living directory. Her report also says the proportion of residents diagnosed with depression is 23 per cent, while those receiving antidepressant medication is at 51 per cent, figures both unchanged from her annual report released a year ago. Mackenzie’s report says the amount of direct care hours seniors receive is continuing to improve with an average of 3.39 hours of care per person per day and inspections of the facilities have also increased.

A new program aimed at curbing violence against health-care workers at 26 health-care sites like emergency rooms and mental health units won’t apply to long-term care and home support aides. Health Minister Adrian Dix says acute-care facilities will be the focus of the model as 320 uniformed protection service officers and 14 people tasked with preventing violence are hired in facilities in all health authorities. Saleema Dhalla, head of SafeCare B-C, a non-profit group that develops injury prevention training for the sector, says all health-care workers deserve to benefit from improved safety protocols, even if the violence stems from patients with dementia. She says 270 incidents were reported among those workers last year, and many cases go unreported.

North Vancouver RCMP have issued a warning about what they describe as a group of fraud artists running a fake gold scam in communities throughout the Lower Mainland. They say the group includes men, women, and sometimes children who wear layers of gold-coloured necklaces and rings when they approach a potential victim to ask for help. The Mounties say the fraudsters may claim to be wealthy foreigners who can’t access their money due to a banking problem, so they offer to sell some of their jewelry at a discounted price or they may claim to have lost their wallet, putting the fake jewelry up as collateral for a loan. The victims later find the jewelry is fake, and police are asking anyone who has been approached in such a way to contact them.

A hobby farmer on southern Vancouver Island is warning locals that a cougar is picking off livestock in the Cowichan Valley. Shannon Flynn of Cobble Hill says they found one of her five sheep dead on Thursday morning, missing a leg and partially buried. The cougar came back and grabbed another of the farm’s sheep the next day and Flynn says they’ve moved the last three to a friend’s farm for protection. She says other farmers in the area have reported a goat and sheep lost to the cougar and conservation officers are recommending locking away your livestock at night to protect them.

The Zombie call has gone out again as the pandemic wains. Studio 9, a private arts school in Kelowna, is encouraging people to put on their zombie gear and meet to dance to Michael Jackson’s Thriller with the rest of the world. The school’s Mike Guzzi says registration will open at 2:45 on Saturday afternoon at Stuart Park and the dancing starts at 3:00 p-m to match other dancers from Australia to Austria and in at least 16 -S states. There are no pandemic restrictions and the event is free, but participants are encouraged to bring food items to donate to the local food bank.