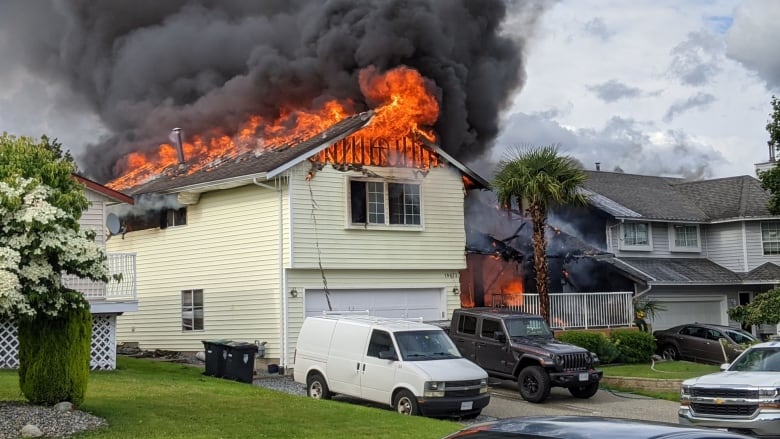 By Jeremy TubbsOctober 5, 2022News
No Comments

A man from the Metro Vancouver area has pleaded guilty to murdering three people, including his mother and brother, just over two years ago. The Integrated Homicide Investigation Team says Kia Ebrahimian pleaded guilty to three counts of second-degree murder in BC Supreme Court earlier this week. Police were called to a house fire in Langley in June 2020 and found the bodies of the man’s mother, Tatiana Bazuar, his brother Befrin Ebrahimian, and another man, Francesco Zangrilli. Ebrahimian is to appear in court for sentencing in December.

Conservation officers are investigating a black bear attack that seriously injured two women near Dawson Creek. The Conservation Officer Service says a family of four was walking along trails when the bear charged and chased them — attacking one woman, while another woman and a teenage boy were injured trying to help her. RCMP say they searched for the victims for about an hour before finding two women, aged 30 and 48, critically hurt with the bear apparently “guarding” them. Officers shot and killed the male bear and the conservation service says it would conduct a necropsy.

The Ministry of Jobs, Economic Recovery and Innovation says BC’s newest Crown corporation, a strategic investment fund aimed at supporting sustainable economic growth, aims to start distributing funds to businesses by next spring. The province is providing the corporation called In-B-C with 500-million dollars to invest in venture capital funds and companies that demonstrate an impact in driving climate action, innovation, and advancing reconciliation. It says In-BC will have the mandate to support people, the
planet, and profit. Jobs Minister Ravi Kahlon says fostering innovative ideas is crucial to growing the economy.

The director of emergency operations for the Sunshine Coast Regional District says a prolonged stretch of dry weather has pushed the water supply to a dire level. Remko Rosenboom says the region’s primary water source, the Chapman watershed, has almost dried up and has enough water to last until early November if it doesn’t get any rain. Rosenboom says the district is pulling water from two other alpine lakes, but those water levels are also lower than they’ve ever been. Other regions experiencing severe drought include the Lower Mainland, all of Vancouver Island, and the Fort Nelson basin in northeastern BC.

The Invasive Species Council of B-C is asking the public to report sightings of what it calls a “highly toxic” plant that can leave people’s skin blistered and burned. The council says an Okanagan family learned the hard way — Doug and Sandra Nimmo were looking after their granddaughters when the children came into contact with Myrtle spurge, a garden perennial with a toxic sap that’s capable of causing blindness in severe cases. The council says the girls woke up the next morning with blisters and swollen skin on their faces, which cleared up the following week. The council says Myrtle spurge grows 10 to 15 centimetres tall and it can be identified by its small, yellow flowers and light blue-green leaves.

The death of country music icon Loretta Lynn at 90 years old has revealed a forgotten B-C connection. The Vancouver Heritage Foundation says Lynn actually got her start in the city, singing at the site of a poultry barn on the banks of the Fraser River. The foundation says the chicken coop also served as a music hall in 1959 when Canadian producers Don Grashey and Chuck Williams watched Lynn perform, and their Zero Records label produced her first hit, “I’m a Honky Tonk Girl.” BC writer Rob Howatson spent years researching the connection and says Lynn recalled her performance at the chicken coup when he interviewed her in 2012.