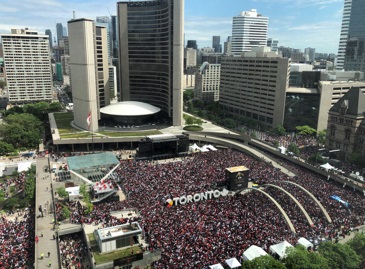 Two people have been seriously injured following a shooting at the Raptors Championship Celebrations at Nathan Philip’s Square in Downtown Toronto.

#WeTheNorth Day was being celebrated in the city with the Raptors NBA Players hoisting the Larry O’Brien Championship Trophy onboard open-air double decker buses.

Many were seen running for thier lives after hearing the gunshots off Bay and Albert Streets.

Police say the victims injuries are non life threatening. They are investigating.

The Raptors are the first Canadian basketball team in history to win the NBA Championships.