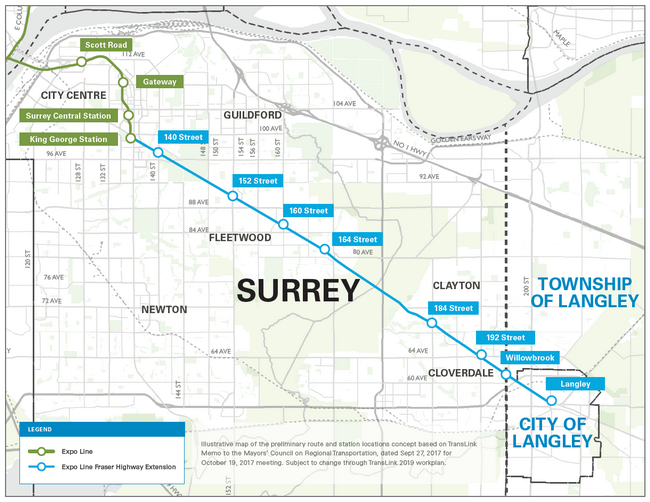 SkyTrain to Langley is $1.5B short

There’s a strong business case for a SkyTrain from Surrey to Langley, according to a TransLink report which also points out there’s not enough money to build it that far.
The $1.65 billion available will get the SkyTrain as far as Fleetwood (at Fraser Highway and 166 Street), in Surrey.
For the full build out to Langley, it would cost another $1.5 billion.

The recommendation right now is to build to Fleetwood, and save the Langley extension when funds are available.
Last year, the region was aiming for a less expensive at-grade rail, which was rejected by the newly elected Surrey council, which ran for office, in part, on the promise of Skytrain.
With Vancouver teaming with Surrey at TransLink meetings, the two cities have weighted votes sufficient to pass whatever the two metropolitan centres agree upon.
Jeff Busby, TransLink Director of the Surrey-Langley SkyTrain project, said there’s a strong business case for the line.
“Benefits come in the form of new transit riders, travel time savings by those riders, as well as other benefits that accrue just generally,” Busby told Pulse FM in an interview Monday. Added to those benefits, are economic boosts in the region and environmental considerations.

The SkyTrain to Langley has $1.24 in benefits for every dollar spent, and the line to just Fleetwood has $1.12 in benefits for that same dollar.
“That means the project is a good investment overall,” Busby said. “… That first stage (to Fleetwood) is also promising.”
Surrey Mayor Doug McCallum has been against staging the project, favouring a complete build, as costs escalate over time. That said, he is in support of the project TransLink has presented.
The idea of escalating costs over time is not lost on TransLink, Busby said.
“That is a consideration, and it’s something we’ve identified in our work,” Busby said.
As Surrey changed direction of the project, the city is on the hook for $39 million for examination of Light Rapid Transit last year.
“We have the city’s agreement to reimburse that cost,” Busby said.
The TransLink board is expected to consider the report at its regular meeting on Friday, July 26.