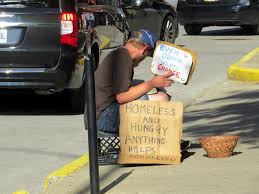 Recently Surrey’s Business Improvement Association (BIA) released their Downtown Surrey Safety Audit. One of the biggest concerns for owners of Surrey business owners – Panhandling. While we don’t see a lot of Panhandling in most areas of Surrey, along KGB in sections in both North and South Surrey you do. Tickets are starting to be handed out to panhandlers along KGB in North Surrey to try and put an end to the practice of standing in the median between busy traffic. It’s not safe, and it’s not the right approach. What does giving an $80 ticket to a panhandler even do? Pretty sure most them aren’t driving so come insurance time – Oh wait, no car, no insurance. There’s a clear answer. It’s time to make giving money to panhandlers and beggars illegal in this province. If you cut off the arm that feeds… There’s those who have ended up on the streets for terrible and unfortunate reasons, but let’s be honest here, a good portion of panhandlers and beggars aren’t using your money for food or to better their lives. You know what they’re spending the money on. And yet we still find the time to roll down the window and feel good about ourselves for helping the less fortunate. We need to stop doing that. What needs to be done is giving British Columbians who donate a significant tax break. The more you donate to places like the Food Bank, or BC Children’s Hospital as two examples, the more you save at tax time. It’s simple and it will solve the panhandling problem.  @neiltalks