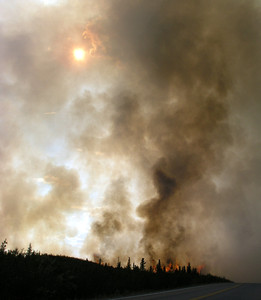 “TICKETS! GET YOUR TICKETS HERE!”

The province is going thru another particularly brutal fire season. We don’t see a lot here other than the odd grass fire caused by – among almost nothing else – a discarded cigarette butt. Despite all the campfire bans in place in BC thanks to bone-dry conditions, some people still don’t get it. BC Conservation Officials handed out 42 tickets for unlawful campfires last weekend alone. Most of the tickets were handed out to people in the Squamish area, although others in the province also were handed a fine of $1,150. They could also be out of pocket another $10,000 in ‘administrative penalties’ and could face a year in jail. Get caught causing a forest fire and you could be looking at a fine of  $100,000 and ten years in prison. But that’s not all. Causing a fire can get you all of that, and charges to pay for firefighting costs as well. 42% of all fires are human caused. Many more to come unfortunately. *5555 to report any fire you see.