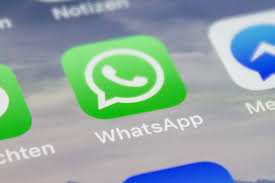 Whatsapp with that Filter?

This week What’s App got hacked. And although I had heard it was done by some firm in the middle east that wanted your personal information, little did I know that WhatsApp were going to come out with something a lot more frightening than a hack attempt.

Have you tried this thing on WhatsApp that can change your gender?

All you have to do is hit a button on the app and the next thing your know you are your opposite gender. It’s a new filter on the app and although…okay sure you want to see what you’d look like if you were a boy instead of a girl or a girl instead of a boy.

What I don’t get is showing the pic off on other SM. Why would you assume I would like to see what you look like in the opposite gender? To oneself yep, I get it. But sharing it on fb, Instagram, or tumblr…Is it just me or is that just plain creepy?  #CREEPY