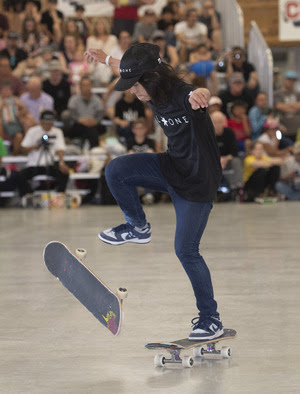 “It’s the first time ever in skateboard history that the winner did tricks using two skateboards at the same time,” said contest producer and Canadian professional skateboarder Kevin Harris. “I dropped the microphone and went over and gave him a hug. No one has ever seen it before in a world competition. It’s a game changer.”

Ten-year-old Yuzuki Kawasaki from Japan nearly made history himself, finishing second overall in the professional division, taking home $2,000. Had he won; he would have been the youngest ever professional winner in international competition. 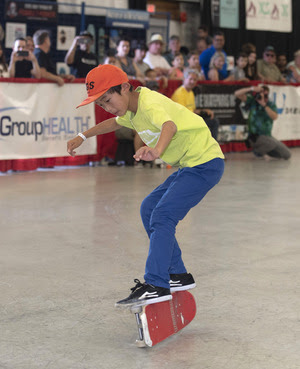 Other notable accomplishments include Mirei Tsuchida of Japan, the only female competitor who finished fourth in the amateur finals, and father and son team of Masahiro Fujii, 46, and Yuta Fujii, 13, of Japan. Yuta narrowly beat his father to finish 8thth in the professional finals.

“He could be a grandfather to some of these kids and he’s still out there competing professionally with them,” said Harris. “What other sport does this kind of generational competition happen in? Not many.”

To learn more about World Round-Up and see a full breakdown of the four-day agenda, visit: https://cloverdalerodeo.com/country-fair/world-freestyle-skateboard-round-up/

The Association is also responsible for year-round management of the Cloverdale Exhibition Grounds (Fairground) that hosts over 1,000 events annually, with eight unique facilities on 100 acres capable of hosting 100 – 100,000 attendees, including trade shows, concerts, festivals, sporting events and is a #BCFilm film-friendly location. For more information on the Association and the 73rd annual Cloverdale Rodeo and the 131st annual Country Fair, visit www.CloverdaleRodeo.com.