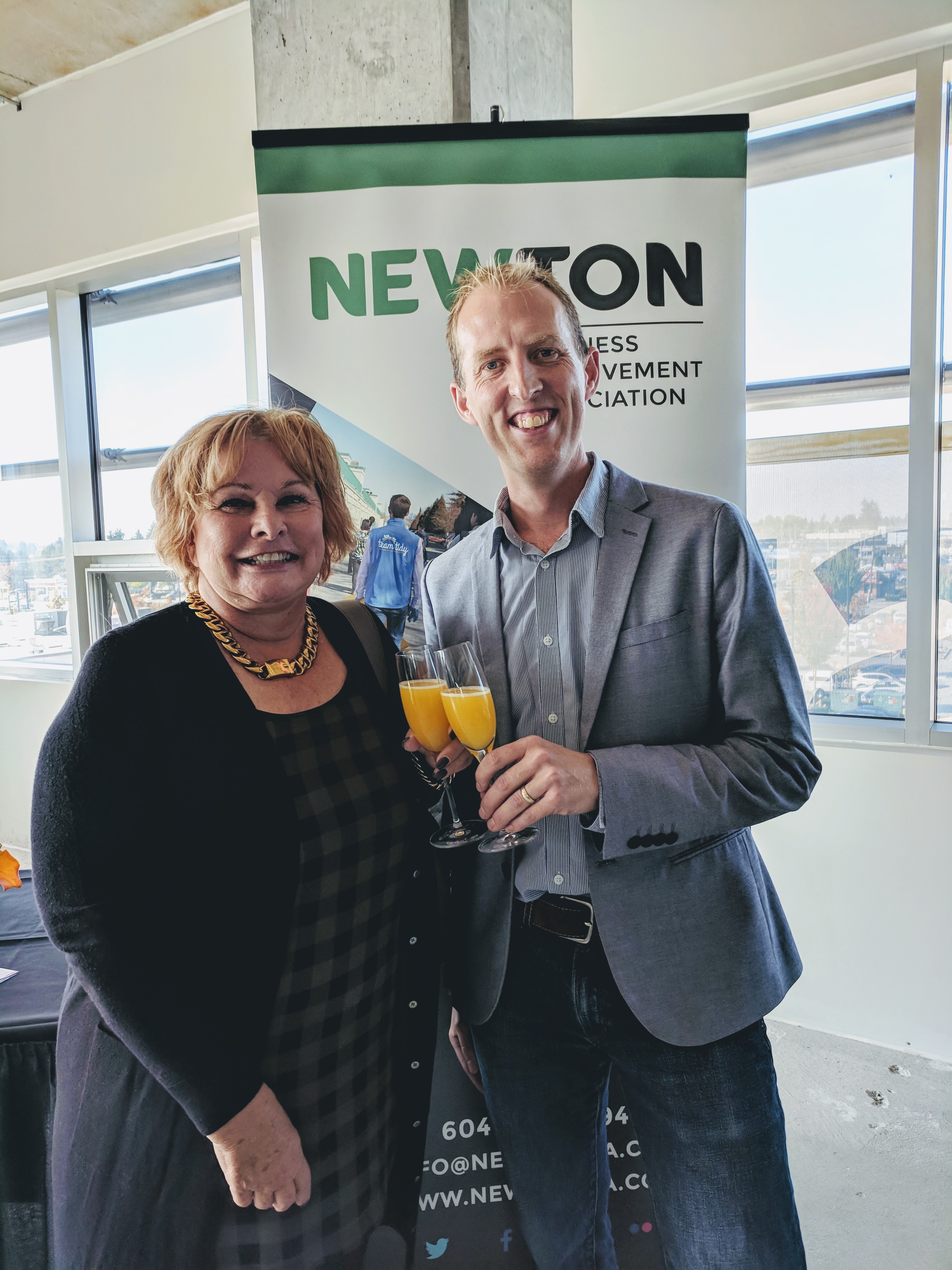 Today the Newton Business Improvement Association hosted the “State of Newton” event, an event for the Newton business community to connect and engage and learn about plans for Newton and how the BIA plans to continue to advocate and work together to make Newton even better.  Newton is home to 33% of the businesses in Surrey, and it is the 5th largest community in BC.  The Newton BIA is a group of 550 businesses and property owners who are passionate about improving the Newton Town Centre.

Some questions asked today by Executive Director Philip Aguirre: “Will Newton transform?  Or lose momentum?  Will the new civic election deliver results in Newton, a community of 136,000 people? A community in desperate need of inspiration.”

MLA Harry Bains began by sharing how the BC government invests in small businesses through tax cuts and other initiatives.

As the keynote speaker, Surrey Mayor Linda Hepner addressed the LRT issue that has come to the forefront of the election.  Mayor Hepner said that after consultation with “many, many different groups”, they looked at the end result they wanted to create.  “What we saw in Newton was the need to have a core that would be the catalyst for residential development that would create the kind of energy and business experiences that we knew businesses could have.  That will not happen with an elevated system.”  Mayor Hepner also shared her frustration with residents who call the system “second-rate”, and referenced cities with successful light rail transit systems like Paris, Barcelona, Brisbane and Abu Dhabi, calling LRT “a first class technology that truly, truly will transform this city and connect the various geographies that we have to connect in order to grow into a major urban centre.”

The mayor also addressed the growth of Newton, the developments and investment in the Newton Town Centre.  She applauded the work of the Newton Safety Unit  and announced that two by-law officers will be dedicated to working with the Chronic Offenders team.

Philip Aguirre, the Executive Director of the Newton Business Improvement Association, spoke to the ways Newton has evolved and how he connects with thousands of people across Newton through their events. “Nothing gets people talking more than 5,000 hot dogs or 1,000 free pumpkins.” The Newton BIA hosts community events like the Newton Days festival series, Spooktacular Newton and Groundhog Day.  “We want the community to be safer; we want more events; we want more placemaking.  We want to kickstart development with mixed-use density.  I’m not going to be shy about it: the Newton BIA supports LRT, on record.”  The BIA also runs such community improvement initiatives such as a Homeless Count, Community Safety Patrol, Graffiti Removal, Merchatn Shout-outs, Safety Audits, Tulip-Bombing and Mural painting.

“Focus on what is strong, not what is wrong: That’s how we’re going to achieve this positive shift.”

Harry Bains kicks off the event.