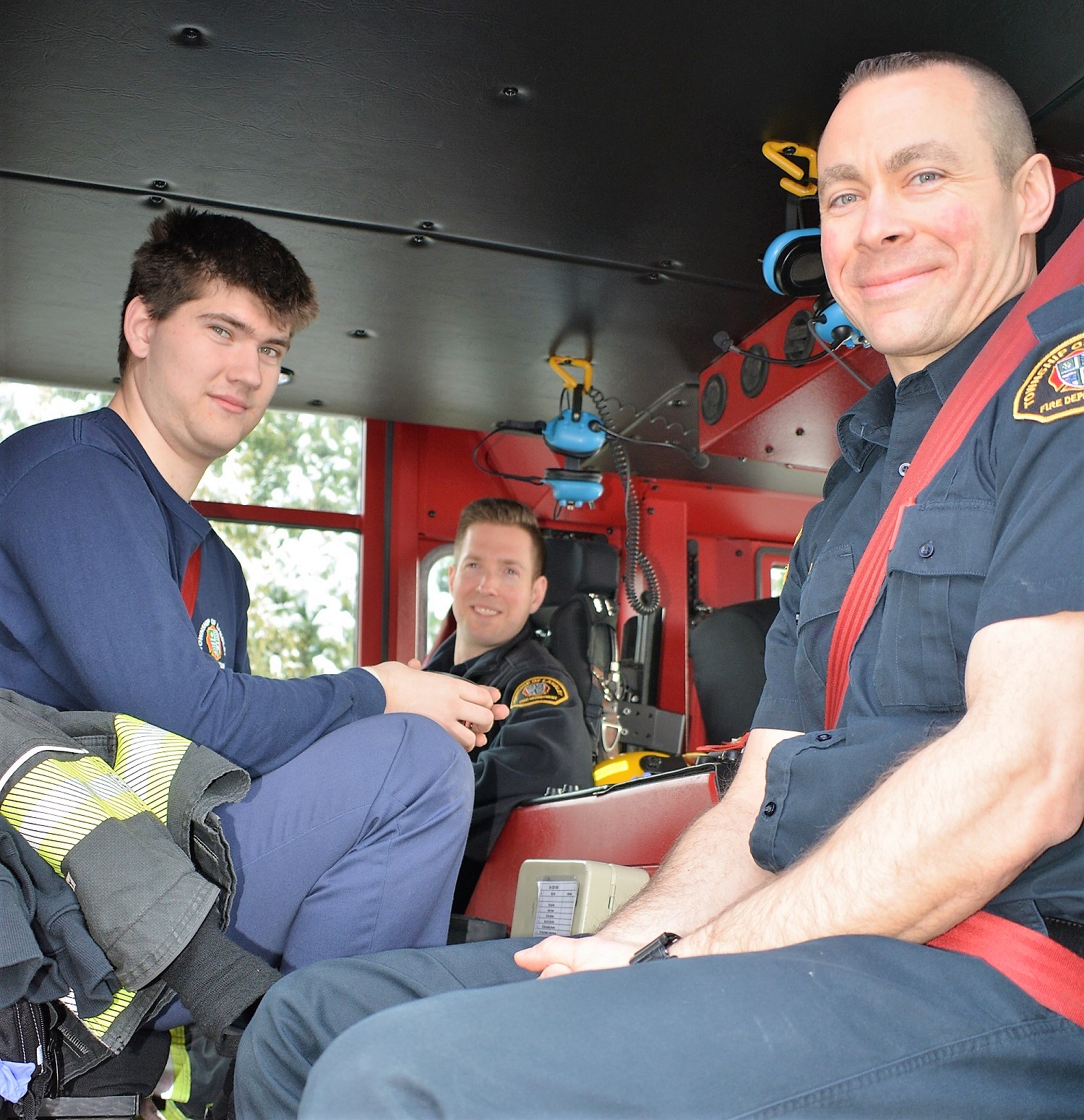 By Vanessa YbarraFebruary 28, 2019Community
No Comments

When it comes to pursuing your dreams, don’t take no for an answer, and absorb every experience like a sponge.

Those are two important lessons 19-year-old Trevor O’Neill learned during a five-week work experience program with the Township of Langley Fire Department, which he said was the opportunity of a lifetime.

“I knew I wanted to get into the fire service, bad,” said the R.E. Mountain Secondary School graduate, who grew up watching local firefighters and the work they do. “I wanted to be a firefighter ever since I was a little kid. It’s how they do it, the people they serve in the community. I’ve seen them throughout Langley, taking care of everyone.”

O’Neill first came to the Township Fire Department through work experience in high school, briefly taking part in training sessions with fire crews – but it wasn’t enough. When he enrolled in KPU’s APPD program in September, he wanted to come back.

Through its Access Programs for People With Disabilities, KPU provides job preparation and work exploration for adults with a permanent disability or a combination of learning difficulties that hinder their scholastic success. The programs involve work experience and prepare students for employment, volunteer work, or further education, but O’Neill’s advisors were not sure placing him with the Fire Department was the proper fit.

“Typically when placing students we look at entry-level positions,” said Catherine Rauk, Instructional Associate with KPU’s APPD Department. “By nature, a career in firefighting requires not just physical competence but a certain level of academic achievement and technical requirements, such as a driver’s license, which Trevor doesn’t have.”

“We always want to be sure the experience is valuable for both the student and for the employer,” Rauk said. “There were too many unknowns here.”

O’Neill was placed in a different industry for the first of his three work-placement sessions offered through the KPU program, but was still eager to work with the fire service. He discussed it with his mother, and the two approached Township of Langley Deputy Fire Chief Bruce Ferguson.

“Listening to them, I felt there a possibility we could do something,” said Ferguson, who spoke with other fire chiefs, who agreed to give it a try. The fire department met with KPU representatives, they exchanged information and concerns, and in mid-January, O’Neill reported for duty at Fire Hall 6 in Murrayville.

“Regardless of the student, regardless of the employee, it comes down to the match, to the personalities and the skills involved,” said Rauk. “This was breaking new ground for us,” she said, noting that O’Neill had done exceptionally well at his first job placement and that Ferguson “had the heart to move this forward.”

Outfitted in his own turn-out gear and working 10-hour shifts, four days a week, O’Neill had a full, immersive firefighting experience. While he could not participate in dangerous situations, he went out on the truck with crews, helped extinguish fires, responded to burning complaints, and provided practical assistance to firefighters dealing with motor vehicle accidents and medical situations.

When not out on a call, he kept busy at the fire hall, training and keeping the facility clean, as all the firefighters do.

“The members embrace him like part of the crew: he works, plays, eats, and jokes with them. He is part of the crew,” said Ferguson. “Trevor is very dedicated, very respectful. He is doing exactly what he is supposed to be doing.”

O’Neill enjoys the pace of the job, and its versatility. “Sometimes you are really busy,” he said. “You show up and don’t know what to expect. You sit down for lunch, the next minute you’re out the door. I don’t know what kind of day I’m going to get.”

Besides gaining practical knowledge such as First Aid, O’Neill has learned a number of life skills on the job, such as “sportsmanship, being nice to guys, and keeping your head up.”

He has also discovered the importance of following your heart, taking in every moment when given an opportunity, and finding someone who believes in you.

“There is always a way around it. Keep at it and you will get your dream,” said O’Neill, who highly recommends KPU’S APPD program and encourages others to explore its possibilities: “They are helping us get into jobs,” he said. “They put a foot in the door for you.”

The experience has been a positive one for the Fire Department as well, Ferguson added, noting that the situation illustrates what can be done within the community to make workplaces and job opportunities more accessible.