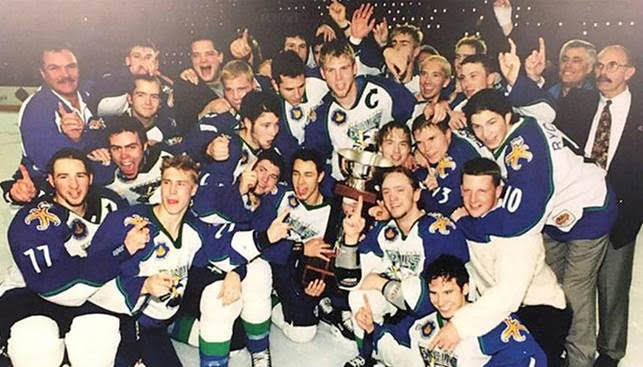 Surrey Eagles to be inducted into BC Hockey Hall of Fame

By Vanessa YbarraJuly 19, 2019Community
No Comments

The Eagles beat the Weyburn Red Wings in the final of the 1998 RBC Cup in Nanaimo to win the title and avenge their loss in the championship game the year before.

The team was led by coach Mark Holick who was in his first season as a BCHL head coach. The Penticton native and current South Surrey resident went on to coach the Eagles for four more seasons, before taking jobs in the AJHL, WHL, AHL and one more stint in the BCHL with the Vernon Vipers in 2006-07. After recently coaching in Europe for two years, he’s returned to B.C. to lead the Yale Hockey Academy program in Abbotsford.

The Eagles leading scorer that year was John McNabb with 106 points. He ended up playing one more year in Surrey, leading the BCHL in scoring with 132 points, and went on to have a nine-year professional career.

Several prominent players from the 1997-98 team are expected to be in attendance at Friday’s event in Penticton, including team captain Kris Wilson, defenceman Matt Erhart, who played four years at Quinnipiac University and now coaches minor hockey in South Surrey, blueliner Joe Vandermeer, who went on to play 20 years in the pros and is the brother of longtime NHL player Jim Vandermeer, and Colin Hemingway, who finished ninth in BCHL scoring the next season with 104 points and was drafted by the St. Louis Blues in 1999 after playing four years at the University of New Hampshire.

The full list of 1997-98 Surrey Eagles confirmed to be in attendance: