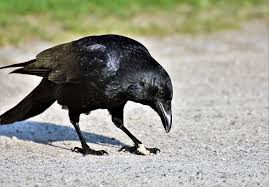 Earlier today I was coming from my gym and sitting in the parking lot when I noticed an injured crow with an obvious broken wing. I did get out ot try and investgate only to have the crow run (not fly) to the other side of the parking lot.

As we know wild animals tend not to want to have anything to do with human brings.

I’ve always believed that wild aninals know something about us and for obvious reasons that’s why they stay away.

After witnessing the crow trying to fly to no avail I thought the right thing to do would be to call someone to see if they could help.

The professionals if you will.

Last time I checked we cared about animals in this province.

We seem to make it real easy to report bears going thru peoples garbage so the conservation hit squad can come and kill at will. Young and old.

Why is it then that to report an injured animal you have to go thru a gauntlet of organizers, societies and phone numbers and only to give up in sheer frustration?

I hope that crow will be okay. But I highly doubt it.

Have you tried contacting someone?