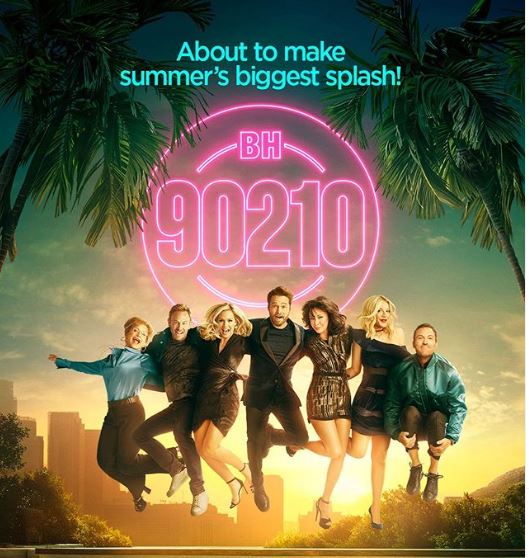 It’s a weirdly meta take on the stars’ lives now.  Based on their real-life personas with exaggerations, the “characters” are going back to work on a Beverly Hills, 90210 reboot.  Fun fact: it’s entirely shot in the Vancouver area, so check out all the locations.  My girls (much cooler than me) spotted Parq, the pool at the Westin Bayshore and drinks at Prohibition.

Jason Priestly plays himself as a hot-headed, conceited indie film director, married to a publicist played by Vanessa Lachey (who is in real life, married to another 90’s heartthrob and actual reality TV star, Nick Lachey).

Tori Spelling is a broke reality TV star married to an ex-hockey player.  Their TV show is about their life with 6 kids – another fun fact, those 6 kids are locals! She seems to be carrying a torch for David Silver – oops I mean, Brian Austin Green.  I mean, “Brian Austin Green”. Ooh man, it’s a l’il confusing.

In real real life, Shannen Doherty recently battled cancer.  The show seems to be a bit self-effacing and silly, so I’m not sure if that’s going to pop up on the show… they are portraying her as difficult to work with (everyone rolls their eyes or cringes when her name comes up!) but as an Instagram do-gooder.

Jennie Garth has faced her share of marital woes, and her on-screen persona shares those as well.  She also struggles with everyone only knowing her as Kelly Taylor.  (In my opinion, she has aged the best out of the group!)

Brian Austin Green who is in real life married to hottie Megan Fox, is married to a superstar singer on the show.  No one shows any interest in him as a stay-at-home dad and former star.  BUT he does seem to be the only one with a great, normal relationship with that superstar.  Awwwww.

Ian Ziering (pronounced EYE-N EERING) is married to a hottie that he seems to adore, and I don’t want to spoil anything but she may not be what she seems.  He seems to have aged well and be the same old boring Steve Sanders.  (Sorry guy.  Must be hard to stand next to Brandon and Dylan!)

Well I had no idea that Gabrielle Carteris / Andrea (ONNNNdrea) Zuckerman was a bit of a gay icon in the day.  Oh my sheltered life. Anyway, she’s now a granny (and if you want to look up her age, it’s 58; she was 29 when she played a high schooler).  She may have a very interesting storyline coming up!

I really just wanted a straight reboot, but after getting used to it, this setup with actors playing versions of themselves is kind of fresh and fun, and there’s definitely some laugh out loud moments, as well as relatable moments as my friends and I are just a few years younger than the ol’ gang (though none of us have six kids or a reality show).

And yes, there’s a brief nod and acknowledgment of everyone’s favourite high school hearthrob, Luke Perry, who tragically passed away earlier this year.  Nothing too serious, which made sense given the tone of the show, but enough that we all felt the feels.

If you missed it, check it out on demand and catch up next week!  I’ll  be watching!  Let us know on social media if you loved it, hated it, or never want to see another postal code again!