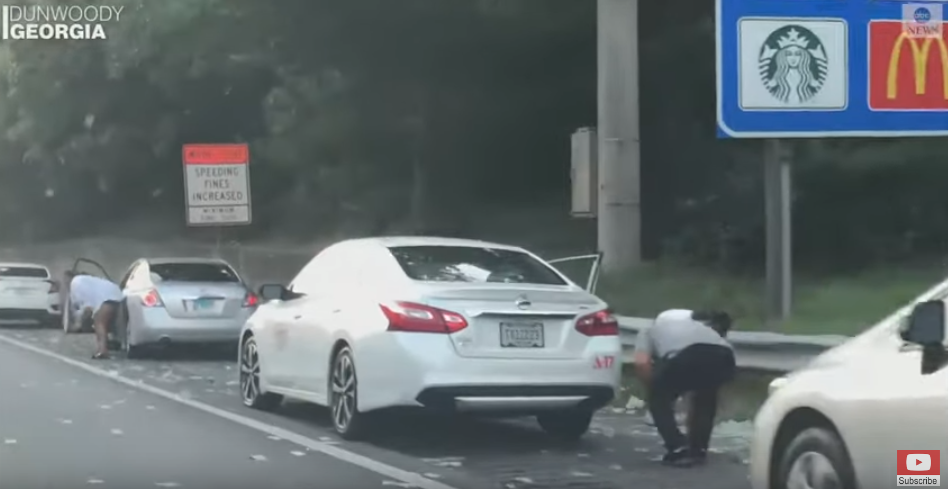 Thousands of Dollars Spill On The Road…Would You Take Some?

By Vanessa YbarraJuly 12, 2019Community
No Comments

If you want to see the perfect example of money greed, look no further than good ol’ Atlanta, Georgia!

Earlier this week an armoured truck crashed on its side on the interstate, sending more than A HUNDRED THOUSAND DOLLARS WORTH of bills flying through the air, scattering all over the highway.

Well good gracious, say it ain’t so! In a Youtube video you can see  dozens of Georgians pulled over on the side of the road literally on their hands and knees collecting the money.

By the grace of god almighty, they thought them bills were raining down from the heavens! And the funny thing is these people don’t seem confused in the slightest.I don’t know about you but if I saw a street littered in cash I would be a little confused and asking myself “what on EARTH is going on?!”But nope, these people don’t have time for that! They’re busy scooping them dollar bills up as fast as they can.

Atlanta police went on the news later that night asking people to please return the money and threatening that if they don’t the’ll face the risk of being arrested. Um, yeah, good luck with that. Pretty hard time figuring out who took what.

Which begs the question that’s now circulating online…what would you do? If you saw a hundred thousand dollars worth of bills flying through the air, would you stop and scoop a little up to buy that new Galaxay S10? Perhaps put an extra hundred down on the mortgage hmmmm?

Not to sound almighty, but I wouldn’t. I’m not saying free money literally at your fingertips wouldn’t be tempting to grab, but I would be too worried I’d be caught on camera on the front page of that nights news. And who knows if you’d keep your job after that too!